Athlete of the Month: Sarah Fogarty 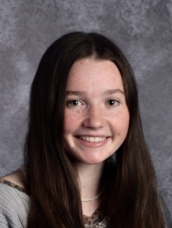 When she’s not bussing tables at the local Scituate restaurant The Rivershed, you’ll find SHS junior Sarah Fogarty dominating SHS sports in the fall and winter seasons. Dominant on not only the basketball court but the soccer field as well, Fogarty is on varsity for both sports and has leadership roles on both teams. She is currently a co-captain on the girls’ varsity basketball team and will be a co-captain during the fall of her senior season on the girls’ varsity soccer team.

Fogarty excels in her positions in both sports exhibiting her strong athleticism and discipline. Fogarty utilizes her good decision-making and positioning as a center back on the soccer team, while she uses her quick feet and speed to funnel the ball down the court as a point guard for the basketball team. Fogarty also plays on club teams for both sports at Galway Rovers for soccer and at Lady Rivals for basketball.

Outside of her success during the winter months, Fogarty flourishes on the soccer field. Fogarty has been playing on Scituate High’s varsity soccer team ever since she tried out at the beginning of her freshman year. According to junior teammate Ava Easterly, Fogarty is a “keen center back who makes tackles and positions herself exceptionally well.”

Despite Fogarty being a multi-sport student-athlete, this edition of Athlete of the Month is during her basketball season. She has been an SHS basketball player since her freshman year and has earned varsity minutes ever since. When asked how old she was when she started playing, Fogarty said, “I started playing basketball when I was 7, because my older brother had been playing and my mom played in high school.” Fogarty plays as a point guard but explained that she has a passion for defense and enjoys that role as well. She’s looking forward to finishing her junior season on a positive note.

Dominating Cape Cod Academy with a 59-21 win, Fogarty scored seven points and played exceptionally on defense. In addition, during the game on December 21st against Silver Lake, Fogarty scored 12 points to help seal the win.

Expect to see more from Fogarty as she continues to develop in both sports leading into her senior year and captainship opportunities. Be sure to attend the next girls’ varsity basketball game on Tuesday, January 18th, at 6:30 p.m. against the Duxbury Dragons, and be on the lookout for number 10, Sarah Fogarty.