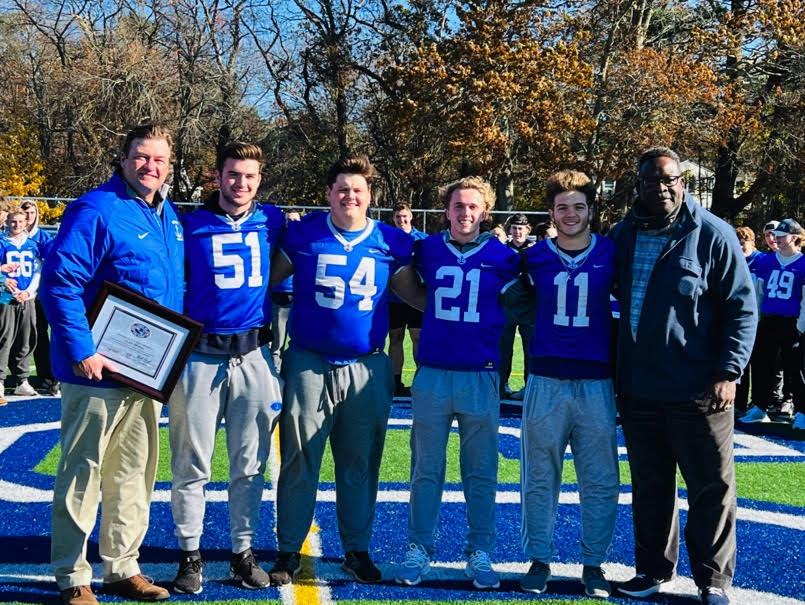 On Tuesday, November 16th, Scituate High School football coach Herb Devine was honored by the Kraft Foundation as the 10th “New England Patriots’ Coach of the Week” of the 2021 season. On Friday of that same week, Coach Devine lead SHS to win his 100th game: the winning game against Ashland, securing the sailors a spot in the MIAA final four.

Throughout his time coaching at Scituate High, Coach Devine has made it to the playoffs numerous times and triumphantly won the Division 4 Super Bowl in 2018. The team once again played in the Super Bowl game at Gillette on Monday, December 6th of this year.

Senior captain Jack Thompson believes “Coach Devine is the best coach on the South Shore.” Like other players, Thompson believes without Coach Devine’s leadership, the team would not be 9-1 in the regular season. Senior captain Andrew Bossey shares similar regard for the coach as Thompson, applauding his ability to “unify the team and get [the boys] to work together towards a common goal.”

When asked how it felt to win his 100th game, Coach Devine explained how at that moment, just winning the game was more important than the 100th win. He empathized that “the collective body of work of 100 victories is more important to [him] than that one 100th win.” He also demonstrated the importance of the players to this accolade that was awarded to him. He gave props to all the players who had the opportunity to play football on the next level in college.

With this recognition as motivation, the team and Devine would go on to end up winning the Division 4 State Championship as a perfect way to punctuate a historic season.