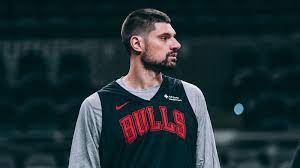 Nikola Vucevic suits up with the Chicago Bulls

March 25, 2021, cemented its name into NBA history: this historic trade deadline boasted 16 trades and 23 teams, the most in each category in 35 years. Big names found their way onto the trade block: Aaron Gordon, a young power forward from Orlando, and Andre Drummond, a rebounding machine who has bounced between teams, are looking to move from rebuilding teams to championship-caliber rosters.

The NBA trades grew quiet on the eve of the deadline, as hopeful fans turned on push notifications to catch an infamous Woj Bomb, tweets fired out by NBA insider Adrian Wojnarowski, as trades took place between teams.  At 12:36 AM Wojnarowski struck with minor news–Delon Wright for Corey Joseph and two picks, which was just the tip of the iceberg for an exciting day to come.  Wojnarowski lived up to his reputation, tallying an absolutely wild number of 51 total tweets detailing and sharing NBA trade news to his 4.7 million Twitter followers.

The first true bombshell came at 11:02 AM,  detailing a blockbuster trade between Chicago and Orlando.  All-star center Nikola Vucevic headed to the young Bulls; in return, they got, young center Wendell Carter and veteran Otto Porter.  In my opinion,  the addition of Vucevic gives the Bulls another all-star to help lead this team to a playoff berth. He will be joining Zach Lavine, another all-star, in facilitating one of the more inexperienced teams in the league.  In return, Chicago only gave up a mediocre scorer in Porter, and a young inexperienced center in Carter. This allows for Orlando to restart on the path to rebuild–and for the Bulls to give the young team some playoff experience while garnering attention from future free agents.

As Orlando Magic fans began to settle from trading their best player, news broke that they were now sending veteran guard Evan Fournier to the Boston Celtics.  With the Celtics picking up another bench scorer, they elevate their bench–one of the largest problems for the Celtics– and for the Magic.  They continue to blow up the current roster and start fresh with the continued growth of draft stock for the upcoming drafts.  As a Celtics fan, I was not upset with losing a few bench players and some picks for a good scorer who can help our young core develop.

Bang! Another trade including the Magic, now dumping off the final piece of the Magic “Big 3,”  Aaron Gordon.   Many teams, including the Celtics, had been pursuing the young forward, but the final deal came when the Denver Nuggets offered rookie point guard RJ Hampton and Gary Harris.  Aaron Gordon elevates the two Denver stars in Nikola Jokic and Jamal Murray by giving them a third scoring option that fits the young timeline of the Nuggets.

The final blockbuster of the deal came later with the news that Victor Oladipo was being moved to the Heat: He was traded to Houston during the James Harden deal and now was on the move again.  The Rockets have continued to disappoint after trading one of their franchise staples in Harden,  but now he would join the Heat.  The Rockets gave him up for basically nothing: Kelly Olynk and Avery Bradley are two former Celtics who had been solid role players, but they are nothing in comparison to the young star of Oladipo.  This has NBA fans questioning if the James Harden trade was even fair for the Rockets.