The Increasing Influence of Team Captains 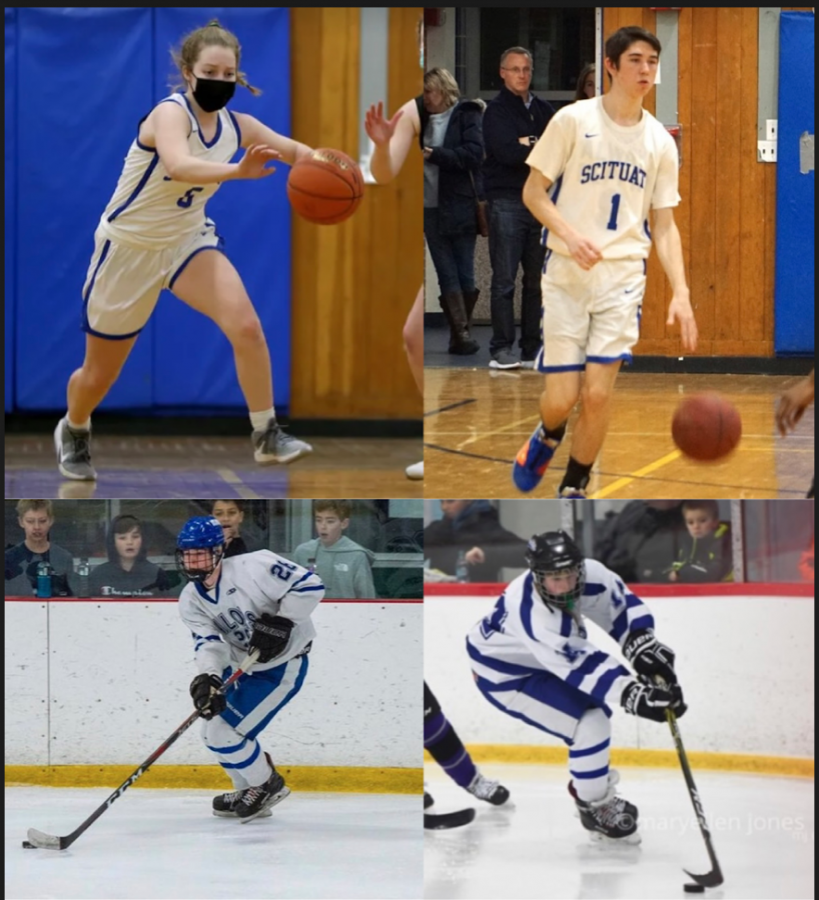 Getting through the COVID-19 pandemic is hard enough, but adding dedication toward a sport has created a much more challenging environment for student-athletes. Due to unexpected quarantine periods limiting play, students have faced more individual prep-time and less time as a team. Although there are obvious struggles for these athletes, they continue to make this winter sports season one to remember in a positive way. These students have shown their creativity and eagerness to play–and win–practicing on Zoom calls or socially distanced workouts. Captains have a more prominent role this year than previous years–especially in leading their team to success.

Senior Boys Hockey Captain Troy Pratt is not letting this pandemic ruin the season for him and his team. Pratt’s goal is to “form a brotherhood with the rest of my teammates and make it far in the playoffs.” Not being able to see each other as much has been an obstacle of the team, as Pratt commented, “Making sure to stay in touch with the team, it’s a lot harder to bond this year than in past years,” but they stay dedicated to the guidelines, so they don’t ruin their season. The star captain is looking forward to setting a good example for the younger players on the team: “Being able to represent my town and wear a “C” is what motivates me the most and I want what’s best for every other guy on the team,” he said. As a leader, Pratt is not going to let this pandemic put a halt on the season. Once he completes his Scituate High School career, #26 (Pratt) will continue his hockey career playing Junior Hockey for a few years to prepare himself for college hockey.

Junior Girls Hockey Captain Hayley McCarthy has made sure that her team is being led successfully like the previous seasons before COVID-19: “This year has presented many challenges due to COVID. In spite of this pandemic, this season I want to ensure that our team is staying connected and having fun.” McCarthy continued, “Hockey practices and games are a great way to break away from stress that is caused by the pandemic and other factors.”

Like any other sport that is being played during this time, team bonding is a critical priority for every sport. “In years past, the team has formed a close bond through pasta parties and hangouts,” McCarthy said, “Even though we are unable to do these things this year, we have done other things like team movie night over zoom and we are planning to do a game night as well. We also have a team group chat on both text and Snapchat that we always use to communicate with each other.”

In any safe way possible, the Scituate Girls Hockey Team has maintained a strong bond with one another, keeping the team intact and positive. McCarthy explained, “Being a junior captain this year motivates me to help my teammates in any way possible. I want to try my best at every single practice and game and motivate the rest of my teammates to do the same.” #14 (McCarthy) has been leading her team by example in any way that she can.

Girls Basketball Senior Captain Lila McGuiggin has goals for this season set in stone: “Our goals for this year’s team is first and foremost be able to have a season and stay healthy. We also want to try and win the league. Because we have such a deep team, we feel as though that is a possibility.” With all the confidence in her team, McGuiggin is sure they will give their best effort to win games and conquer the league.

In addition, McGuiggin always makes sure her team is 100% prepared for their games. “We have been doing group facetimes almost every night,” she said, adding, “and have also been doing Zoom workouts while we are at home so we can still do stuff as a team while we can’t actually be together.”

Being comfortable and able to communicate with everyone on and off the court is very important, and the girls’ basketball team continues to deepen their bond in unconventional ways. #5 (McGuiggin) recognizes that as a senior, this is her last chance to play with the team: “I just want everyone to make the most of this season and see how far we can get. Everyone cares so much about this team, which helps motivate me to want to lead us to success.” After high school, McGuiggin is going to Rochester Institute of Technology in Rochester, New York, where she will play basketball for the Tigers, passing along the vital role of captain to eager underclassmen.

Reed Connolly is a senior captain for the Scituate boys basketball team and has been looking toward getting back on the court with the team in search of victory: “My goal for this year’s team is to win as many games as we possibly can as well as win a championship,” he said with determination. There are always new, creative ways to promote team bonding every day during this pandemic. #1 (Connolly) shared his team’s method: using the track, Facetime, or dribbling workouts to “get better individually, and as a team.” Whether it’s working out separately or together, everyone on the team is held accountable and expected to arrive prepared on game day.

By nature, high school athletes have an inner motivation, which they strive to carry throughout the season. Like other athletes during this time, Connolly expressed his gratitude and his desire “to be the best player as well the best teammate,” adding, “our whole team and coach staff deserves it because of how hard we work every day.” Being such a caring and thankful leader reflects on the court and sets a great example for the younger athletes.