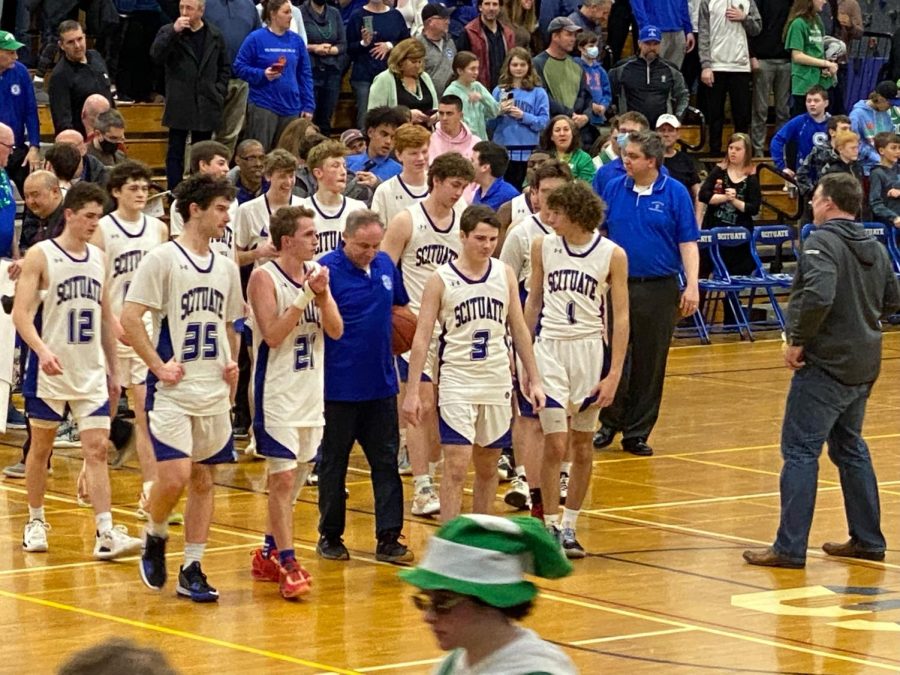 The Sailors gather in the middle of the court to collect Final Four trophy after their game against Wakefield on Friday, March 11th.

This past Friday, March 11th, the SHS boys varsity basketball team welcomed the Wakefield Warriors to the rowdiest gym on this side of the Mississippi. In the most Irish town in America, the St. Patrick’s Day-themed student section kept the gym sounding like it was going to explode. The packed student section’s constant noise made it hard for Wakefield to score all night long, resulting in the Sailors beating the Warriors 61-53.

Scituate senior Keegan Sullivan led the team’s victory with a light 23 points, 9 rebounds, and 6 assists, followed by an electric performance from the rest of the Sailor squad. Fellow senior Johnny Kinsley added 14 points and came up with numerous big shots throughout the game. The Sailors played well-rounded, fundamental defense, containing back Wakefield’s offense and crashing the glass hard–especially senior Sam Benning with 11 boards. Despite the visiting Warriors making the game close at the end, it was no match for the Sailors with the Town of Scituate behind them. The Sailors will keep dancing and live another day in the MIAA tournament.

The Sailors play in the semifinals on Wednesday, March 16th, vs. Malden Catholic at 6:30 PM at the Taunton High School gym. Be sure to wear your Sailor blue and support the Sailors! Tickets for the game will be sold on gofan.co