View from the Other Side of the Stage 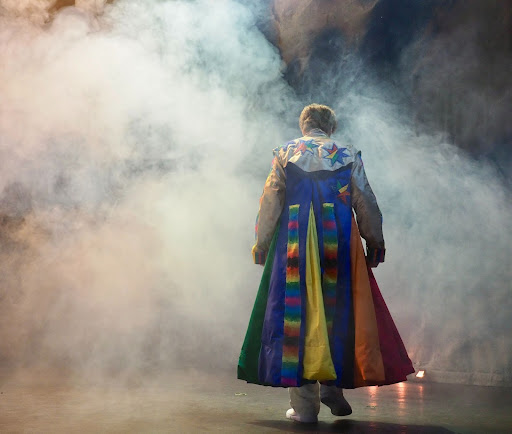 You are sitting in a theater. Not a movie theater, but a real theater–a Broadway show. The overture starts and adrenaline rushes through your body. The curtain rises and the show begins. You watch the actors and actresses effortlessly move across the stage. After an actor exits a scene, you suddenly wonder: What is theater like backstage? How do the cast and crew feel about entertaining hundreds of people? You may not realize it, but so many different people go into making the show. Sure, you’ve got the actors who are “the stars,” but there’s also the director, the choreographer, the lighting designer, the sound designer, the set designer, and the music director who taught the actors the very songs they are singing.

At the Company Theatre in Norwell, MA, that person is Melissa Carubia, who directs the music for the Academy/teen shows. Carubia has been working at Company for eight years as the A.C.T. (Academy of the Company Theater) music director and as the director of education, a role which she has enjoyed for years. “The thing that drew me to working at Company Theatre was the way that they treat the kids,” she said. According to Carubia, the theater treats student actors with the same level of attention as adults. The theater does not hold back from its attention because they are working with students. A.C.T. shows have a professional band in its pit as well as professional lighting and set designs. At Company Theater, Ryan Barrow is king in the domain of sets. His attention to detail and “lush sets” were among the many compliments Carubia shared.

Carubia believes the common goal of both actors and tech personnel is to “give the audience an entertaining show.” She says the production is not only dependent on the actors, but also on the many people who work behind the scenes cleaning up mishaps or making the show even better through their valued contributions.

Recently, the Company Theatre presented the musical Joseph and The Amazing Technicolor Dreamcoat, which was performed by a cast made up of teens and kids. Company Theatre Co-founder and Artistic Director, Zoe Bradford, described this young group as “terrific.”  Bradford loved the show, especially the megamix dance at the end.

“The emotional/comedic content is amazing in a backstage and on stage setting that the audience may not perceive,” said Bradford regarding the differences between the actors and the audience’s perspective. She also mentioned, “technical wonders, including fly rigging, how props are made, timing, backstage singing,” as theatre aspects that audiences don’t necessarily know about. Likewise, Bradford stated that it is hard for the actors to really understand what the show “looks or feels like from an audience perspective.”

SHS senior Will Moon was a member of the Company cast of Joseph. Moon has been performing in shows at Company Theatre since 2016. Before then, Moon did not have an interest in theater. His brother was the actor in the family, and he never felt the urge to audition for a show. However, that all changed when Company Theatre held auditions for School of Rock, which was Moon’s favorite movie at the time.

Moon sees Company Theatre as “well established” compared to other theater companies in the area. Like Carubia, he believes the Company Theatre personnel treat child actors with the same respect as adult actors. He said it doesn’t matter what age you are–you have the same expectations from the staff. Additionally, Moon credits his experience at Company Theatre with teaching him a good worth ethic.

Moon believes audiences are under the impression the actors are exceptionally well prepared or “down to a T,” as he put it. In fact, he believes each show is “its own unique experience” for the actors. Moon said he got to know his character better during the show more than he did during tech week, as the stress had taken its toll. For audiences, the show is a “new experience.” Meanwhile, for the actors, it’s about “what’s coming next” and  “being in the moment.”

Moon enjoyed the cast of  Joseph because of the huge age gap between the actors. The oldest actor was twenty while the youngest was eight. Again, he stated that every actor was treated with the same amount of respect.

Moon wishes audience members could know more about what happens behind the scenes–the amount of work that everyone puts into it. He wishes the audience would not hold onto the stigma that the ensemble is less important than the main character. According to Moon, each actor in the show puts in the same amount of work to make the show the best it can possibly be.