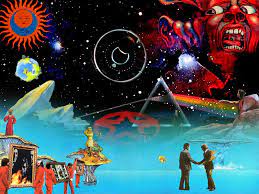 The genre that emerged in the late 60s and skyrocketed throughout the 70s has seemed to fall victim to the test of time, unlike many other music genres from earlier decades that remain popular today. Despite so many prog-rock bands being the foundation of modern rock and were incredibly popular at their peak, why does the modern audience choose other genres over prog-rock?

Progressive rock, or prog-rock for short, is one of the most elaborate music categories to arise from the past century. Fellow senior and enthusiastic prog rock fan Julia Flynn defines the sound as “experimental and innovative through the use of more creative elements like unique instruments and interesting time signatures, as well as improvisation.” But within the past few decades, the genre hasn’t received the same amount of attention as its 70s counterparts. The natural evolution of music technology has certainly played a role in the erosion of the genre; as music technology became increasingly advanced and accessible to musicians, the need for innovation with raw instrumentals decreased leading to a drop in inventiveness.

As with any genre from the past, cycles between a general loss in interest and comebacks as trends are frequent. Yet prog-rock hasn’t seemed to make that comeback in the same way other genres do, especially in comparison to other bands within the realm of classic rock. Even the heavily prog rock-based songs by big names in classic rock such as Pink Floyd and Led Zeppelin seem to fly under the radar, despite these groups being some of the most well-known in music history. Obviously, it’s not the fact that the music is older that is off-putting to the modern audience; bands from the 60s and 70s such as the Grateful Dead, Fleetwood Mac, and The Doors have picked back up in the past few years as younger generations have become increasingly interested in vintage culture.

There’s something else unique about this style of rock that most people nowadays are not willing to experience: the lengthy nature of most songs. One characteristic of prog albums is that they’re often best listened to when in the context of the other songs, as groups typically planned for the tracks to be consumed in order, so as to convey a story or larger concept. Some tracks can total upwards of 20 minutes, which isn’t attractive to radio stations nor the very fast-paced, work-driven nature of society.

In short, prog-rock is weird. Admittedly, there are some really bizarre breaks in songs that feature sudden shifts in tempo, time signature, style, and unusual instrumentals.

This lack of palatability to the general public, combined with song length, has definitely led to a decline in general popularity, but the genre is far from dead. Avid fan bases and devoted listeners of the incredibly innovative musical style have kept the legacies of these musicians alive, and there are plenty of groups today that use the progressive/jam band/improvisation style of bands from the past.

With all of this being said, I think it’s necessary to share some great albums from this genre to extend it to people who otherwise wouldn’t have known where to start with such a characteristically complex music style. My top recommendations for getting people into progressive rock include In the Court of the Crimson King by King Crimson, Close to the Edge by Yes, Mirage by Camel, Bundles by Soft Machine, Meddle by Pink Floyd, Gentle Giant by Gentle Giant, and Thick as a Brick by Jethro Tull.